Can you help us get our knocker back? 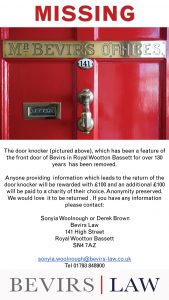 Meet the team at Bevirs Law:

We have 7 Partners who manage 40 staff and work in 7 different teams: business and commercial; property; family; care; litigation; private client (wills and probate); and employment. The partnership consists of 4 male (57%) and 3 female (43%) partners.

Our fee earning staff are made up of 33% men and 66% women and work from our 3 offices located in Royal Wootton Bassett, Swindon and Calne. We can come to you if you are unable to come to us.

We are parents, grandparents and dedicated animal owners with 51 between us (16 cats, 13 dogs, 4 horses, 1 parrot,1 rabbit, 4 guinea pigs, 2 hamsters and 10 chickens not to mention lots of fish).

We have been advising individuals and businesses in Wiltshire and beyond since 1885 and between us all, we have over 405 years post qualification legal experience.

We are proud to work with you, not just for you.

As those who read this blog regularly will have realised, my principal interest relates to development matters.  This is not only because I find the issues arising in the negotiations relating to options, conditional contracts and promotion agreements intellectually interesting but because whether we like the idea of more housing this has to be achieved.  There are not enough dwellings for us all to occupy.   How this is to be achieved raises interesting and serious social issues.  We have to find ways of constructing dwellings in areas where either people want to live or where the government would like us to live.  That involves a variety of issues – some technical and some social.  For example, if the government wishes to encourage industry to go to deprived areas then the relevant infrastructure to enable that industry to supply its market must be put in place.  However, the creation of the infrastructure may itself lead to increased pollution through increased traffic.

As a result of this interest one of the areas of law over which I keep a watchful eye relates to town and village greens.  The reason for this is that applications in respect of such greens are used as a method of stopping or delaying development.  The power to use such applications in a negative way was restricted by David Cameron’s government which, in my view, was one of his better decisions.  Certainly, a better decision than his decision to make an announcement that he would like to return to politics because he is bored and would like to be Foreign Secretary.  That puts me in mind of Peter Cook as Mr Misty saying “I think I will go judging”.  But, enough said on that as I am meant to be discussing town and village green applications.

There has been a recent decision in the Court of Appeal relating to greens where the Court of Appeal seems to have reached a pragmatic and sensible decision.  For those of a legal bent the case is TW Logistics Limited v Essex County Council & Tucker.

In outline, the case revolved around the use of a quayside area over which members of the public were claiming recreational rights.  The owners had fenced off the area which was a working quayside because of the risk of employees and others falling into water.  Initially, the County Court following a public enquiry registered the quayside as a town or village green based in its use by local residents over 20 years.  The activities that were claimed were:  swan feeding, crabbing and recreational walking with or without dogs.

The owners were claiming:

Firstly, the Court of Appeal was not persuaded by the argument about implied authority based on the concept that an implied permission to negate the prospect of rights does not exist in law.  The Court noted the difference between a permission which required positive action on the part of the landowner and the mere tolerance of use.

Secondly, the Court of Appeal was not convinced by the criminalisation argument.  The landowner would continue to have the right to use the land in the manner to which it had been previously used provided that this was not incompatible with the public’s recreational use.  On the facts the Court held that this was correct in this case and that this should be taken into account in reaching the decision.

The thrust of the argument appears to be that the use by the landowner must not be incompatible with the use of those seeking recreational rights.  This means that not only can pre-existing use, prior to registration as a green, continue but if the provided future use is not incompatible then the use can be changed.  In this case the registration was upheld.

There is an interesting side point which does not come out of the case to which I have referred but which relates to signage.  To try and protect against people successfully claiming rights over land many owners use signs:

(c)        that the recreational use is by specific permission.

This is a part of the armoury of the landowner, but care must be taken to ensure that the notices are sufficient.  For example, a sign that says “No Fishing” from a particular area will not prohibit other recreational use or fishing from a different area.

There is a simpler way of protecting land from becoming a town or village green which is to use the provisions of the Commons Act 2006.  To successfully claim a right over land there must, among other points, be established a minimum user period of 20 years.  A statement can be lodged with the Registration Authority that stops the clock on such period.  That deals with historic claims but does not stop new claims building up after the Notice has been served.  This means that the landowner will have to lodge the appropriate notice once every 20 years.

The case to which I was referring demonstrates the proper use of the application for registration of town or village greens which is to protect a genuine recreational facility as distinct from trying to use the legislation purely to prohibit development.